The airport came to be in existence in 1934 and was simply a cleared area for a 4,000 foot long by 400 foot wide landing strip funded by a Works Progress Administration grant and administered by the Arlington Commercial Club. The Navy took control of the field in August 1940 and further improved the landing area by clearing 278 acres for two crosswind runways. The Army arrived in 1942 and the existing runways were abandoned. The Army bought additional land for two 5,000 foot long by 150 foot wide asphalt runways with connecting taxiways. 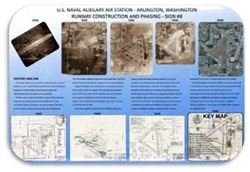 A large mixing plant was constructed, preparing hot asphalt mix through all kinds of weather. The mixing plant generated about 1,100 yards a day and the operation was only halted on one occasion in which five inches of snow fell. Runway progress was completed under Osberg Construction Company and was finalized in 1943.

As the Navy regained command of the airfield in 1943, one hazard was found during training operations. In stormy weather the northwesterly crosswind altered directions and became a southeasterly crosswind. This impulsive wind provided difficulty in landing and taxiing the aircraft, particularly because of the narrow-gauge landing gear. Ground loop accidents were common and some resulted in serious injuries. These accidents motivated Navy personnel stationed at Arlington to request authorization to construct a third runway. Permission was finally granted in 1945 and the Northwest Construction Company was given the contract.

Accompanying the construction of the crosswind runway and a new taxiway, drainage ditches that had existed parallel to the runways were eliminated. The ditches proved to be unnecessary for drainage and were a hazard to aircraft. Flush lighting was installed along all three runways and taxiways, allowing for better operations during night and difficult weather conditions. Construction was satisfactorily complete on August 21, 1945.