After much discussion and collaboration by City leaders, local farmers and businesses in 1934, Arlington Airport was constructed southwest of the small town of Arlington. With a budget of $11,650, approximately 37 acres were cleared to include a 4,000 foot runway using 1,000 gallons of gasoline, two tons of blasting powder, and 86 men. As the Navy took control, the perimeter of the airport increased to encompass 200 acres, which incorporated a crosswind runway of 3,500 feet, aprons, and taxiway and runway lighting. Through court proceedings, the Navy then acquired a total of 278 acres and expanded the perimeter even more. 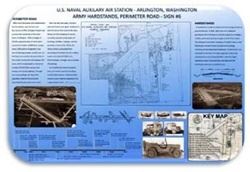 Over the next few years, the land switched hands once again, landing first in the Army’s, then back in the Navy. Along with the changing of owners came the constant construction of buildings, facilities and runways and the purchase of more land. When the military finally completed their ownership of the land, the 2.5 million dollar airport consisted of 1,160 acres, three runways, a hangar and a number of buildings. Surrounding the airport property was a perimeter road that the Navy used for their patrols. Portions of the current airport trail are located on the original patrol route.

A hardstand is a hard-surfaced area for parking aircraft or ground vehicles. In 1942, when the Army obtained permission from the Navy to use the airport as a strategic airfield, additional land was bought to fulfill their needs. The Osberg Construction Company of Seattle came in and laboriously worked to erect several new buildings, including several dispersed hardstands. As the Army’s use subsided for the field, the Navy regained control and continued the use of these facilities. Intensive flight operations were conducted day and night and the hardstands were put to excellent use.