As the Navy regained its former possession of the airfield, room for expanding and improving its facilities proved efficient. Accompanying the construction of various buildings, a Recreation Center was drawn into the plan. Given an estimated budget of $2,000 and final permission to use Robertson Hall as the official building of choice, the center was completed and opened on Saturday, September 18, 1943. 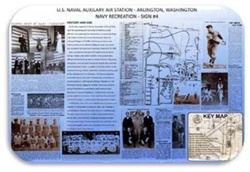 The Navy put together competitive teams that were championship contenders on several occasions including the infamous ‘Navalairs’ in the Northwest Service League for football. Tennis tournaments and golf tournaments were held as well, drawing many spectators to fierce competitions. A badminton court was placed inside the recreation center and horseshoe pits built outside the hangar as well as next to the Recreation Center.

In 1944 there was a diminutive debate over the center as to whether it had justified its expenses. After two meetings it was decided to continue the center, but on a modified scale. This did not put a stop to its constant improvement and in March of 1945 a new 340 foot combination baseball/softball field was assembled. The Recreational Center and fields drew many and brought a sense of community to the small town of Arlington and its Navy visitors.