The project involves hydroblasting the east ramp, removing sections of paint, and prepping the remaining paint for restriping.

The project involved the fabrication and installation of a one side Airport Business Park sign.

The project involved designing a taxiway edge lighting and signing system to be installed along taxiway Charlie on the west side of the field.

The project involved removing the existing paint and repainting the entire beacon structure. 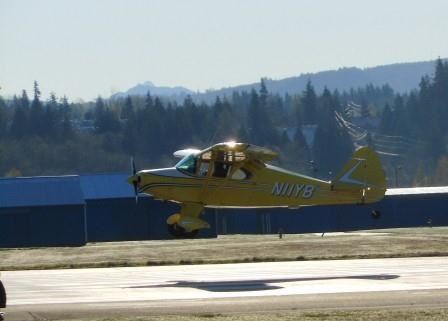 The airport office parking lot was repaved this summer after new subbase was laid. New curbing was installed as well as a new ADA compatible parking space with a ramp to the grass picnic area.

Runway 16-34 was striped by the County in June as well as the following Taxiways: Alpha, Charlie, and Delta.

In February work was completed to remove and replace gutters on the following city owned hangars: C, D, E, G, H, and J.

Improvements were made to the glider operating area between A2 and A3 in October. These improvements included grading, seeding, and rolling the area for smoother and safer glider operations.

The west ramp and taxi lane north of Taxiway Alpha were fog sealed and re-striped in September. 50% of the project was funded by a WSDOT grant.

The airport's rotating beacon underwent improvements to its tower and a new beacon was successfully installed in June. Staff has received compliments from pilots on the improved visibility of the new beacon.

Runway 16-34 and multiple taxiways were crack sealed to extend the pavement's useful life. Runway 11-29 was re-striped in July.

The airport had the compass rose re-certified in March 2015. The 100 foot circle is painted on the apron of Taxiway East near runway 11-29. Contact the airport office for documentation.

This project involved installing taxiway lighting and lighted signs along the entire length of taxiway alpha. Taxiway alpha is the primary taxiway for the airport serving the main runway 16-34 and the east flight line area. The project also included replacing the existing lighted hold signs on taxiway alpha and constructing taxiway fillets along the connectors if adequate FAA funding is available.

The project entailed the installation of a backup generator to support current and future airport lighting in case of a power outage. The FAA, WSDOT Aviation and the Airport funded the project

The project will included a new three lane commercial road to provide a connection between 188th Street and 172nd Street, as well as serve as a collector arterial to the proposed Arlington Airport Business Park.

The airport office expansion involved adding onto the existing office to include offices for WSDOT Aviation Division, adding a community room and additional airport offices. A portion of the existing office was remodeled to include a pilot information lounge and weather center. The past office footprint of 1,389 square feet was increased to about 7,839 square feet (6,450 plus 1,389).

Elcon Associates, a lighting engineer company, was hired to design a lighting plan for the south hangar area and ramps. Elcon has provided the airport with construction ready drawings and bid documents to light the west ramp, east ramp and city hangar areas.

The airport property was re-appraised in 2009. This appraisal is an FAA requirement and will be used to set the land lease rates for the next five years, 2010-2014. Former land rental rates were (without leasehold tax):

Barnard Dunkelberg and Company was hired to provide Airport Master Planning services to the airport. The master plan update shapes the future of the airport in providing the Airport Office with guidance in infrastructure improvements and land development. The goal of the master plan update is to provide the framework needed to guide future airport development that will cost-effectively satisfy the aviation demand, while considering potential environmental and socioeconomic impacts. To view the working papers contact the Airport Office.

The airport's compass rose certification expired March 2012. The airport had the compass rose re-certified in April 2012. The 100 foot circle is painted on the apron of Taxiway East near 11-29. Contact the airport office for documentation.