The Arlington Volunteer Fire Department organized on December 22, 1905 with George Murphy as the first Fire Chief and the first fire station located in the city hall, then located at the Southeast corner of McLeod and Third Street.

In 1906, the Department was comprised of 55 Volunteers who responded to 7 calls. Also in 1906 the city council ordered a 40 foot bell tower to be erected, this housed the fire alarm bell that was used as the fire alarm until 1925 and then later to sound the nightly curfew during WWII. 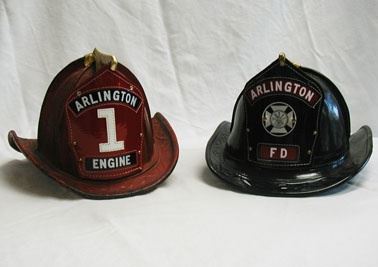 In 1925 a new city hall was completed with a new modern fire station. This new building held the apparatus on the first floor with a meeting room, kitchen and sleeping quarters on the second floor and a brass pole connecting the upstairs with the apparatus bay.

From then until now, the Department has seen advancements in equipment, training and services.

Also in 1961, a new station was built at McLeod and Second. This station, known as Station 46 or Fire House 46, was remodeled in 2011. A new fire hall, Station 47, was built in 1984 with the finish work completed by members of the Department.

The first paid full time employee of the department, Chief Dean T. Olsen, was hired in 1989 by Mayor John Larson and brought a new era to the Arlington Volunteer Fire Department.

In 1994 the city council purchased the Dr. West Eye Clinic located to the south of Station 46 and which housed the Administrative Office for a time. This building was demolished in 2011 during the Station 46 remodel.

On May 1, 1999 the Department took over the Medic service from the Hospital and added nine full time Paramedics and EMTs to the roster.

In 2003 three of our local chaplains formed a support group and Support 46 went into service. For those who are not familiar with this program, Support 46 is comprised of chaplains who are ready to help in times of crisis.

In 2009 the city annexed the Smokey Point area and Station 48 came to life.