While undergoing several construction projects, the Navy found it necessary to install storage buildings for their much needed ammunition. In March of 1944, Atherton Construction Company erected five magazines in an unused area south of the runways. Of those five, one was labeled a fuse locker, two consisted of high explosives, and a small arms magazine and pyrotechnic locker occupied the last two. Another magazine locker was constructed at the hangar and was marked the ready ammunition locker. 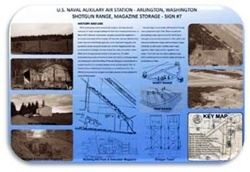 While this storage proved worthy for the gunnery, 0.50 caliber ammunition was costly at 26 cents a round. As a result, a training program was developed in which the firing of free and fixed guns was simulated. A student would sit in a standard airplane turret, and proceed to “fire” at motion pictures replicating enemy planes on a cylindrical screen. This efficient and economical program was highly praised and was adopted for use at all Naval bases.

Several ranges in connection with Gunnery Training were complete in April 1945. These included the boresighting range used primarily for test firing of fixed guns in planes but used also as a rifle, pistol, and advanced malfunction range; and the shotgun ranges including the high tower, modified skeet range, regulation skeet range and four regulation trap ranges. There also was an airplane sighting range, which enabled gunners to practice range estimates on actual planes in flight.