The U.S. Naval Auxiliary Air Station in Arlington, Washington began in 1940, when the Navy leased the airstrip from the town of Arlington to supplement training facilities at Seattle. However, no important construction took place until 1942. In that year the Navy permitted the Army to develop the field as a strategic base for medium bombers to counteract the Japanese invasion of the Aleutians. The Army purchased additional land, and the Osberg Construction Company, under Army contract, constructed two 5,000 by 150-foot, asphalt-surfaced runways with connecting taxiways and hard standings for dispersal of planes, a control tower, a well, and living and messing facilities for 50 officers and men in theatre-of-operations buildings, completing the work about March 1943.

Early in 1943 the Japanese threat in the Aleutians diminished and at the same time the Naval carrier program required additional training fields within reach of gunnery ranges in the Puget Sound area. Accordingly the Naval Air Center, Seattle, resumed control of the field, arranged for purchase by the Navy of Army facilities, and contracted with the Austin Company to build the following at a cost of $917,000: 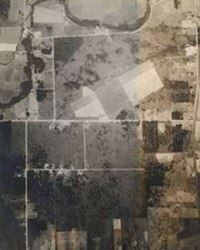 The Army retained only the right to joint use of these facilities if again required as a strategic base. This continuing possibility of strategic use is reflected in the location of the barracks nearly a mile from the hangar and in the retention of trees and underbrush as natural camouflage.

On 26 June 1943 the station was commissioned under authority of General Order 161. Captain C. A. F. Sprague, then Commandant, of the Naval Air Center, addressed several hundred contractors’ employees and visitors from Arlington and Seattle. Lieutenant Leland L. Wilder, A-V (N), USNR, took command with Lieutenant Elmous M. Mead, A-V (S), and USNR, as executive officer. Both were to serve through the duration of the war.

At this time construction under the original contract was about 50% complete. Limited berthing and messing accommodations were available, and on 2 July VB-139 reported aboard for operational training. Between then and the cessation of hostilities twelve composite squadrons and six light air groups followed one another to Arlington. Their personnel included 732 officers and 2,229 enlisted men.

Operating experience soon showed need for several major improvements to the station. First and most important, the persistent northwesterly wind, blowing across both the north-south and northeast-southwest runways, presented a hazard to the operation of F4F-type planes because of their narrow-gauge landing gear. A request for a third runway was initiated in the fall of 1943, but authorization to build was not received until early 1945. The Northwest Construction Company obtained the contract for construction of this runway and connecting taxiways and for elimination of ditches parallel to existing runways, which had proved unnecessary for drainage and hazardous to planes. At the same time flush lighting was installed along all three runways and the principal taxiways. Work was completed 21 August 1945.

A second defect in the station as initially laid out was the water bound macadam roads. These created a serious dust problem in summer, and in winter their surface softened under the rains, and deep “pot holes” developed, causing much damage to vehicles. Arrangements were made for penetrating oil treatment by an Army contractor in 1943 and by F. Birch and Sons Company under Navy contracts in 1944. On both occasions work began late in the fall and was prematurely halted by the winter rains. Finally in September 1945 the Birch Company completed road-mix asphalt surfacing of all principal roads and parking areas.

The original plan of the station did not include either magazines or a firehouse. It was soon apparent that existing Army buildings were unsuitable in construction and location for these purposes. In the spring of 1944 the Atherton Construction Company was awarded a contract to erect five magazines in the unused area south of the runways. The following fall Vickers Construction Company constructed a new firehouse adjacent to the north-south runway. The choice of this location, close to the flying field and equidistant from hangar and barracks area, has proved wise, since it permits combined action by crash and fire crews in either type of emergency with a consequent reduction in the strength of both.

In addition to such improvements as these, three important construction projects were undertaken to accommodate new functions of the activity. First was the expansion of facilities for servicing aircraft. Originally this function was performed by the Fifth Service Division of Headquarters Squadron Six at Naval Air Station, Whidbey Island (One officer and 75 to 100 men) and by enlisted personnel of the carrier squadrons. The only work spaces available were small shops in the hangar and a row of moveable sheds south of the hangar. Operations were limited to routine engine checks and minor repairs.

In the fall of 1944 as part of a general expansion of station functions the Gaasland Construction Company was awarded a contract to erect south of the hangar Class “C” overhaul buildings, consisting of an Overhaul Building, an Armory, a Radio and Radar Building, and two portable paint shops. A detachment of Carrier Aircraft Service Unit 7 took over the operation of these shops, which were equipped to service engines, air frames, propellers, instruments, and electronic equipment. The strength of this detachment varied, but at its peak included about 12 officers and 500 enlisted men. 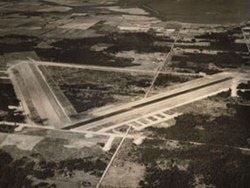 Coincident with the development of these overhaul facilities was the institution of a ground training program for pilots and air crewmen. In the fall of 1944 a temporary layout of turrets and special devices was set up in an unused Army building, and a temporary shotgun range was put into operation. Meanwhile the Gaasland Company began work on a standard fifty-man Ground Training building for instruction in free and fixed gunnery, link trainers, communication, navigation, and recognition. As part of the same program Gaasland built a bore sighting range for test-firing fixed guns in planes, shot-gun ranges for trapshooting and for high-tower, modified and regulation skeet, and an airplane sighting range, where gunners estimate range on actual planes in flight. A new station department consisting of 5 officers and 26 men manned these facilities and supplemented them with a pistol range and malfunction range where gunners could test-fire guns which they had inspected and assembled.

The third major addition to station facilities was the maintenance shops and garage. The original complement of the station included a number of artificer ratings, and it was contemplated that these plus a small civilian crew would perform the functions of the Public Works and Transportation Departments. However the task of maintaining over 100 vehicles and the numerous structures of the station proved to require an increasing number of civilian specialists, who needed space, tools, and equipment to do the job. The Gaasland contract therefore included a new garage, a public works building (housing the joiner and plumbing shops), a paint shop, and a lumber storage building. Increasing emphasis on replacement of Naval personnel by civilians led eventually to the employment of 67 civilians in the Public Works Department and 30 in Transportation.

By 14 August 1945 Arlington was a well-balanced station equipped to support two light carrier Air groups for either day or night operations. No major projects were pending at that time, and it was felt that none remained to be undertaken unless a significant addition was made to the functions of the station.

At the close of World War II, the U.S military reduced funding and operations around the United States. On October 10, notification was received from the Chief of Naval Operations that Arlington would be reduced to a caretaker status on 1 December 1945.